No blogging today as I just now bonded out after this little problem at the family reunion.

Will get back to you when my lawyer says it's safe to talk again.
Posted by tmfw at 12:35 PM No comments:

When you get to be a certain age, especially if you have played sports or otherwise been physically active, stuff starts to hurt.  I ran and played competitive tennis until my late forties.

Due to degenerative arthritis in my lumbar spine, I no longer do distance running.  Due to a slight tear in my right rotator cuff I am banned from tennis and pretty much doing anything over my head.

But even before my most recent physical maladies, I have practically lived on Non-Steroidal Anti-Inflammatory Drugs or NSAIDS for the past 20 years.  First it was Celebrex, the ads for which showed older folks dancing on the beach, which I guess was designed to show its miraculous healing properties.  I took it back then to ease my hamstrings and Achilles tendons from the rigors of playing tennis 3-4 times a week. And it worked great.

Then Celebrex and Vioxx started killing people and it got took off the market. Indeed, Celebrex might have caused the heart attack that took my Aunt Jean in her sleep. So, my doctor switched me to a prescription dose of Naproxen which is sold as Aleve over the counter. I took 500mg of that twice a day until I hurt my shoulder in the gym.  That's when they switched me to meloxicam which I have been taking for close to three years now.

It works great.  It gives me as much relief as the Celebrex or Vioxx did.  And I only have to take it once a day.  Indeed, I can't imagine playing golf, working out or raising my right arm above my shoulder without meloxicam.

So imagine my amusement when last week the FDA issued new warnings about the risks of taking all NSAIDS, including meloxicam were greater than once believed.  According to an article on the subject in the New York Times, the evidence of increased risk of heart attack, heart failure and stroke "is now extremely solid."  The risk is higher in people with heart disease and people over 65 with with heart disease are urged to be "extremely careful" with this class of drugs.

Of course, I have coronary artery disease (CAD) which is the genetic bequest of my father.  However, I am asymptomatic despite having a pretty high calcium score which is indicative of gunk in my system.  And I have a completely lousy (perversely referred to as "strongly positive" by the medical profession) family history.  My paternal grandfather died from a coronary at 56.  My own father checked out for the same reason at 52.

But I got a few things going for me.   I don't smoke.  My BP is well controlled. I'm not obese.  I don't have diabetes.  And I am extremely active physically.  The cardiologist didn't do a stress test on me last November because there was "no need" for it given what I do in the gym on any given week.  And none of the docs I got on the payroll right now have called, texted or left me Facebook messages to quit taking the stuff.  Indeed, my PCP refilled my prescription last week.

So what to do?  It's a risk-benefit thing I suppose.  Do I quit taking a good and useful medicine that helps me maintain my vigorous exercise habits, which in turn, helps my health because of an increased risk of what they refer to as a "cardiac event" and to which I refer as "buying the farm?" They give cancer patients exceedingly toxic medications in order to kill the cancerous lesions or cells.

That's not a completely lurid comparison and I certainly don't equate myself with a cancer patient.  But there is a cost-benefit aspect to virtually everything. And I guess this is no different.  In any event, my physical is next month.  I guess we will take it up then.  I think I will live that long.

Indeed, if I play my cards right, in October I will be the first male infected with my grandfather's genes to hit 60 in two generations.

God Save The Queen

No blogging today.  I'm too busy watching Roger Federer return from the dead at Wimbledon.

Keep calm and watch tennis.
Posted by tmfw at 10:47 AM No comments:

The Opposite of the Manly Art of Pugilism 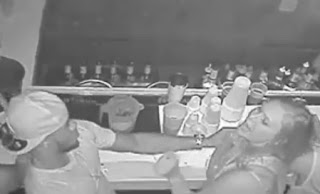 "Any man who hits a woman is a coward. And I don't need cowards on my football team."
Then Texas Tech Coach Mike Leach


Thus was Mike Leach quoted by Jeff Benedict and Armen Keteyian in their expose of college football entitled "The System." Leach was talking about his code of conduct that governed what players did off the field.  The erudite and eccentric Leach-now at Washington State-called his code the Three Queen Mothers.  Players who were caught stealing, smoking dope or hitting a woman were kicked off the team.  Period. No questions asked.

The image above is of Florida State quarterback De'Andre Johnson slugging a woman in a Tallahassee bar last month.  You can see the full video here on Deadspin.com: http://deadspin.com/video-shows-fsu-qb-deandre-johnson-punching-woman-in-fa-1716030886

FSU Head Coach Jimbo Fisher, who certainly is no stranger to recent high spirited antics from his student-athlete quarterbacks-has hauled off and suspended Johnson from the football team on an indefinite basis.  Johnson has also been charged with misdemeanor battery by local law enforcement.

First the human sideshow known as Jameis Winston and now this.  Can they recruit quality human beings at Florida State or what?

Let's not make this too complicated.  The video reveals that a putatively drunk chick tried to take a half-ass swing at him.  But can it seriously be said that Johnson was acting in self-defense?

No. It can't.  Hearken unto the words of Johnson's lawyer as quoted an hour or so in TMZ.com.

"While it is clear from the video that De'Andre Johnson was not the initial aggressor," attorney Jose Baez said with presumably a straight face. " [h]is family wants to take the lead in helping him learn and grow from this experience."

"He is currently participating in community service, and faith-based programs focused on battered women, substance abuse and the empowerment of children."

This is an organ recital.  It is not a defense.

Nobody asked me but Jimbo Fisher-or whoever is in charge of FSU (and by that I mean the actual institution of higher learning)- would do well to adopt Mike Leach's Three Queen Mothers as the Seminoles' code for off-field conduct.  Don't hold your breath.

"What does it take to get kicked off the team at FSU?  Shooting up a convent?"

My buddy Don posted the following:

"Throwing too many interceptions."

Look for De'Andre in the Garnet and Gold about October.  Surely this will mean that he will have "learned and grown" from "this experience" by then.  And that he will have had the self-indulgent pussiness rehabbed out of him too.

No MSF this week. I'm off to the Zarks to spend the weekend at Crystal Bridges.

If you must drink and use fireworks please do so responsibly.