I'm Really Quite Interested In Seeing What's Going To Happen To Him. 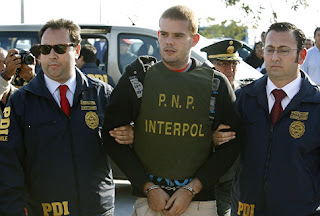 Granted, it would be a fair statement to allow that my understanding of the ways of the fairer sex is imperfect at best and non-existent at worst. I have been jettisoned by women for reasons that still cause me to scratch my head during those moments, admittedly rare, that I permit myself to dwell on them.

And I guess that it would also be a fair statement to admit that we men do not have the same opportunities in this area that women do seeing as how there are very few incarcerated female serial killers out there for us to visit on Sundays. Off the top of my head I can't think of any. Mass murder is more the province of men. Women typically are too busy doing stuff to devote much time to killing folks. Besides, it's not their style. A person has to be alive to be reminded that he is a no-good, dragass, son-of-a-bitch, who is making the speaker's life miserable. Such amusing commentary is useless to the dead although they should be commended for their luck at such moments.

But stiil, I don't get it. The Menendez Brothers got married in prison as did Jeffrey Dahmer. Arkansas's most famous Goth, Damian Echols of the West Memphis Three fame is a loving husband. And now word comes out of Peru that Joran van der Sloot, widely suspected of killing two young women, one of them being Birmingham's Natalie Holloway, is getting offers of marriage from all over the place.

Why would anybody want to have anything to do with somebody who has been accused, much less convicted of killing somebody? Killers tend to very self centered and emotionally distant people. The kind of people most women say they don't like!!!!!!

Women also don't like men who lie. And Joran has told more stories than Raymond Carver. He's told the authorities he didn't kill poor Natalie. He told a private investigator that he did. He confessed to killing that poor girl in Peru. Then he recanted it, saying that he was "tricked." Yeah right. Even his own damn mama has washed her hands of him albeit not before she gave scores of interviews in which she discussed ad nauseum how hurtful it was to be thought of as the mother of such a universally despised scumbag. Make that universally despised by those not asking for his blood stained hand in Holy Matrimony.

Maybe if I play my cards right I can catch the eye of the Octomom. Or Janet Jackson. Or Lindsay Lohan.

Joran van der Sloot is proof that there is a market for anything. There's hope for me yet.
Posted by tmfw at 8:20 AM 1 comment:

Boston Celtics coach Doc Rivers told a Boston radio station that the highly combustible Rasheed Wallace is probably going to retire. Here is a link to the story in the Detroit Free Press:http://www.freep.com/article/20100621/SPORTS03/100621042/1320/Rasheed-Wallace-likely-to-retire

I must confess that Wallace, whom the French sportswriters referred to as "le fool mutinous," is one of my all time favorite knuckleheads. You gotta love a guy who managed to get himself thrown out of the McDonald's High School All Star game.

But fear not, NBA fans. Gilbert Arenas will be through with his suspension for carrying guns in the locker room next season. The knucklehead void created by the departure of Sheed will be capably filled by then.
Posted by tmfw at 5:29 PM 1 comment:

The French press has referred to their underachieving World Cup soccer team as "mutinous fools."

Good Morning dearly beloved! I have returned from my hiatus from blogging. I return unto you fit, tan and well rested. Well mostly. I have a strained right hip from overdoing golf and Miracle League. And I have a huge hematoma on my right thigh from accidentally banging into the corner of counsel's table in the Courthouse. The hip is better. And the good news is that x-rays revealed no arthritis which surprised both myself and the orthopedist. But damn does this thigh hurt. Ugh. The Marines say that pain is weakness leaving the body. Screw the Marines. This thing hurts.

Today is Father's Day. I typically write about Father's Day and Mother's Day as well. However, with Mother's recent passing I pretty much feel that these chapters in my novella are closed now. Buck has been dead for longer than I knew him. Which is pretty strange when you think about it. And certainly not the natural order of things. Indeed, I wouldn't have given the day the second thought but for the recent ads in print and on TV. So I celebrated by by buying Father's Day specially priced golf balls and cologne.

My first post-Mom Mother's Day was pretty uneventful. I am now discovering that this year will be an accretion of "firsts." And Mother's Day 2010 was my first without a Mother to go visit. It wasn't a bad thing. It was just a thing. I darkened the door of the Methodist church for the first time since Easter. I thought sitting with my friends was a better move than sitting alone. And so I went. And earlier this month it hit me in the middle of a 3 day trial in Federal Court that I was spending her birthday at the Courthouse.

Not a bad thing. Just a thing.

What else have I been up to? I read another short story for local radio show "Tales From The South." If you want to hear it you can get the link from the previous post here. If you don't want to hear it, fine. I have been asked to take pictures of the neighborhood that will be put up on the not-yet-actually-in-existence website that will be administered by the Hillcrest Property Owners Association. I will put that link up as soon as they give it to me. If you don't want to look at it, fine.

The little gym where I have worked out, hung around and "bs'ed" with folks closed abruptly last month. Evidently, Amy lost her ongoing dispute with her landlord concerning the noise level in the gym which caused no end of bitching from the other tenants in the building. Hey, I've been in plenty of gyms in my day. The Wellness Studio was downright monastic compared to most exercise joints. Anyway, I need to find another socially acceptable place where I can hang around women wearing scant attire. It's close to a bad thing because I liked the convenience of Wellness and I miss seeing my friends there. But it's mainly just a thing.

Like most sports fans I have found the recent machinations in the world of college football to be pretty damn interesting. I plan on writing about it more after the dust settles. But I think we may conclude that whatever Texas wants, Texas gets. And that Baylor, Kansas, Kansas State and Iowa State should thank their lucky stars that they are still in what is left of the Big Twelve and not in Conference USA or the Sunbelt. Or as one caller to the Paul Finebaum show said Friday "those little bitches are damn happy to have landed where they landed." This is true. And even though all of this backstabbing was football driven, you can bet that the basketball people in the Big Ten were telling their ADs "For God's sake do not let Kansas and Baylor join."

Another irony. Now that Colorado and Nebraska have both bolted for the PAC Ten and Big Ten respectively the Big Twelve now has ten teams and the Big Ten has 12. Maybe they could swap out.

More proof that change is inevitable: PM and I met for lunch Friday at the Town Pump. It was our first trip since it changed hands. One of the things we liked about the old Town Pump was that it was pretty much a dump. Rumor has it that it was a bookie joint at one time. I can believe that.

The new and improved Pump has a Tiki Bar outside in the back. !!!!!!!!! It now offers live entertainment at night along with karaoke. The old drunks who were practically in residence at the bar there back in the day have been replaced by attractive young women drinking tea and munching on salads. The phone in the kitchen has been silenced.

This is just not right.

I mean, it still has Sportscenter going on 4 flat screens at once. It is still dark enough inside to induce blindness when you step back out into the sunlight. And the pool table and shuffleboard are still there. They just moved them to increase the seating like a real restaurant or something.

These are not bad things. They are just things. Just an accretion of little things in this my year of "firsts."

I will keep you posted as I experience even more in the coming months.