White Stones-Memorial Day 2012 at the VA Cemetery in Little Rock. 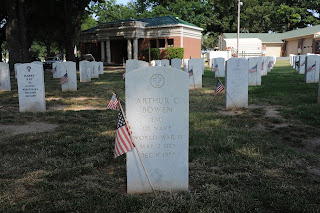 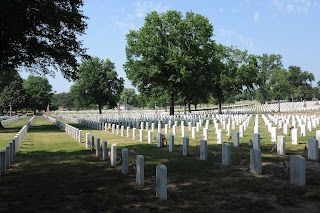 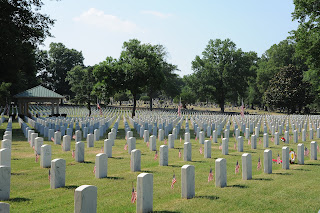 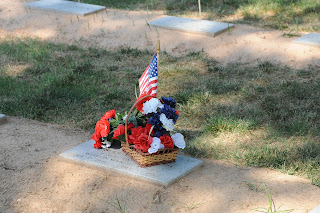 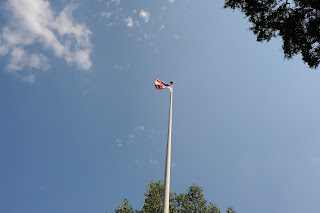 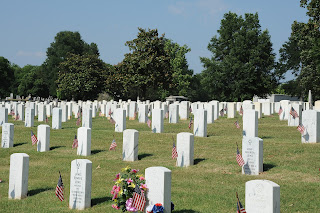 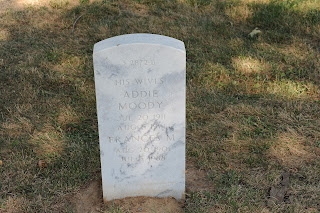 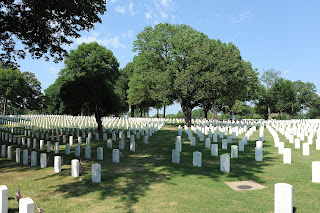 My friend Michele joined the club yesterday.  It's a club nobody wants to join but can't avoid.  Michele's Mother died yesterday.  Her Mom was only 58. Which means she had to have been pretty young when her daughter made her debut on this planet.

I have known Michele for-what?-15 years or so by now.  I first met her when I allegedly assisted her and DOJ's Environmental Defense Section in a couple of wetlands cases back in the late Nineties. A tall thin Nebraskan, we hit it off immediately primarily over our shared love of beer and sports.  She and I have kept up over the years.  This is despite the fact that she thinks I should go vegan like her. And she"s kind of a pain in the ass about it.

My favorite story-or one of them anyway- about her is when the devastating tornadoes came through downtown Little Rock in 2002 or so.  She called me the first thing the morning after to see if I was OK.  I assured her that I was fine and I told her how much I appreciated the call.

"I lived in a trailer park when I was little," she said, "I know how scary tornadoes can be."

While it is true that only in America can a person go from a trailer park to the Department of Justice, it is equally true that Michele's trip was made easier by the loving example of  her Mom.

She talked about her Mom a lot.  Which brings me to another Michele story.  She approved of my participation in Miracle League which for the uninitiated is a baseball league for disabled people.  Michele's mom coached her softball team.

"Heck," she told me.  Like I said, she is from Nebraska.  She says "heck" a lot. "We had disabled kids on the team. Mom insisted on letting them play." Which was pretty unusual twenty something years ago.

This is an interesting time of life.  More of my friends are now joining me in the club as we say farewell to our parents.  I have recently said goodbye to one of my best friends.  There will be others as year succeeds to year as the old hymn goes.

They say losing a Mother is the hardest.  I don't know about that.  That may be romantic nonsense.  Losing my Mom was not traumatic in the sense that my mother suffered greatly.  Death put an end to that.  And our relationship, especially in the last 10 years of her life, was that of guardian-ward as much as anything.  So I don't miss her as a parent or as a companion.  But I find myself thinking of her from time to time.  And I still kick myself over some ways that I feel that I did not serve her as well as I might have.  I don't think that will ever end.  At least not until they stick my earthly remains in the wall at the Methodist church down the road.

It will be far harder on Michele.  I don't know what happened but her Mother's death was unexpected.  And she didn't just lose a parent.  She lost a young Mother, her best friend and "everyone's 2nd Mom" as she put it on Facebook.  One doesn't easily get over that level of heartbreak.  Not easily at all.

I tried to call her but the message went to voice mail.  The text that followed a little later said, " Plane just landed and got your voice mail.  Will be in touch soon.  I love you too."

You know where to find me Honey.  And welcome-I guess- to the club.  You can come sit right here by me.  I want to hear more stories about your Mom.

As some of you may recall, financial matters interest me. It's not that I have any money to speak of.  I am not a wealthy man by any stretch of the imagination.  But I can meet the bankruptcy code's definition of solvency.  It's not much.  But I can do it.

Like many people, I just kinda fell into what became my life's work.  I got hired right before the bankruptcy lawyer left.  Hence, I became the bankruptcy lawyer.  And I practiced bankruptcy law for many years.  I have litigated with and against various lending institutions.  Over time, I came to develop a keen interest in how individuals and institutions make decisions about money and finance.  This is partially why a local consumer group with a highly alliterative name hired me as a consultant.

As the line in the song by Adele goes, "People are crazy.  People say crazy things."  They especially say crazy things about money and taxes.  Especially during an election year.  Just a couple of weeks ago my friend Jennifer felt led to render a disquisition on Facebook about tax policy, of all goddamn things, for lack of a better title.  While it is not known what set her off specifically, she was in high dudgeon against the nutbar notion that "Taxation is Theft."

And she rightly pointed out that while we are all entitled to our opinion in this regard, the government has to pay for police, and filling potholes and raising armies etc somehow.  These things have to be done.  Most of the police powers of the states and towns cannot be privatized.  The good and useful things that are necessary for our security and for domestic tranquility are paid for by our taxes.  Indeed, I started to join her discussion by quoting Oliver Wendell Holmes's (I think it was) famous dictum that "Taxes are the price we pay for civilization."  But she was on a roll and I have learned to stay out of her way at these times.

In his column Thursday about the Euro crisis, particularly as it pertains to Greece. the New York Times's Paul Krugman made an observation about the difference between the Euro crisis and the financial meltdown of our own.  (By the way, the chapter on Greece in Michael Lewis's excellent book about about the global financial crisis called "Boomerang" is entitled "They Invented Math.")It's pretty simple.  A retiree in Florida was still getting her Social Security checks and still had access to Medicare despite the fact that our economy had gone to hell in a bucket.  Her Greek counterpart has no such  assurance from her government.  Here's the column here: http://www.nytimes.com/2012/05/18/opinion/krugman-apocalypse-fairly-soon.html?hp

I hadn't really thought about it precisely in those terms.  But he is correct.  Most people in this country still believe that there is some sort of social contract between the government and you and me.  When I call 911, I expect somebody to answer.  I expect the police or the fire department to come.  I expect to have my garbage picked up.  Pick your favorite service. That's because I pay taxes so that government can provide these services.

Here's another angle.  Greeks are starting to withdraw their money from the banks.  It's not a full blown run on the banks yet.  Krugman refers to it as more of a "jog" on the banks. A jog on the banks would not even happen in this country.  A run on a bank is the nightmare scenario.  That is why the FDIC tries to take a over failing bank long before folks start showing up with suitcases and pillowcases seeking to withdraw all the cash they have on deposit.  The FDIC takes it over.  Sends the Officers packing and opens the bank the day after it is put into receivership.  Representatives are there to reassure the depositors that their money is safe.  And thus the crisis is typically averted.

Although the banks pay a fee for FDIC insurance, when it comes down to it the depositors' money is backed by the Full Faith and Credit of the United States Government.  I wouldn't trust the government, such as it is, of Italy with a wet match.  Isn't guaranteeing the stability of the banking system a cultural good in and of itself?  And let's leave the latest debacle with JP Morgan out of it.  JP Morgan can handle a 5 billion dollar hickey.  Indeed, its stock will probably head South which will create what is referred to in the investment game as a "buying opportunity."  Ironic, non?

My larger point is this.  We are going to hear lots of crazy things about money and taxes in the months to come.  Arguments concerning government programs and the what constitutes the wisest use of tax proceeds have been around since Alexander Hamilton floated debt obligations to fund the Revolutionary Army.  Twas ever thus.

And to you stalwarts that spout what the Internet informs you was written by Ayn Rand, you recipients of regularly delivered mail who evidently expect water to magically appear when you turn the tap, to you I ask, "This is a bad thing, how?"

Did You Hear The One About Why Jewish Husbands Die Young? 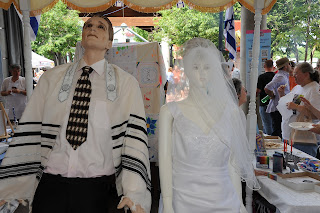 So the nice lady running the Jewish Wedding booth at today's Jewish Food Festival asks me, "Tell me Sir.  What do you think the young groom is thinking judging from the expression on his face?"  I thought for a moment.  "Oy.  How did I get myself in this situation?" "Correct!" she said.  "Of course, the bride doesn't look too happy either.  I'll try to find a more cheerful couple for next year."

I Gotta Nikon Camera. I Love To Take Photographs At The Farmers Market and FURRS Rummage Sale 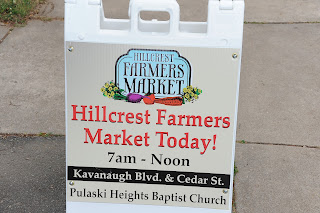 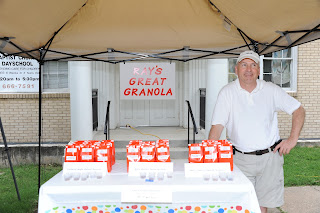 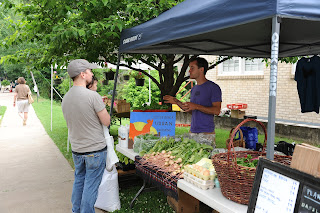 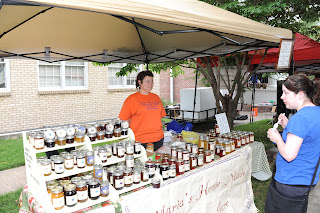 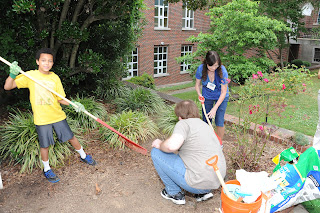 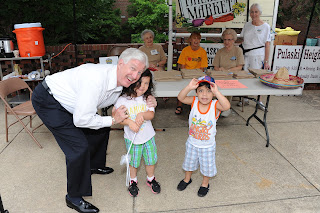 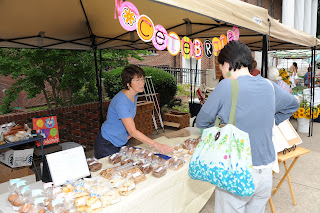 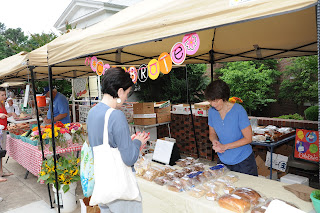 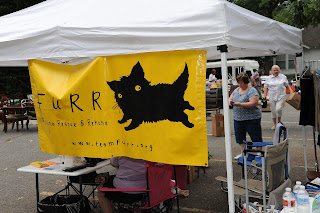 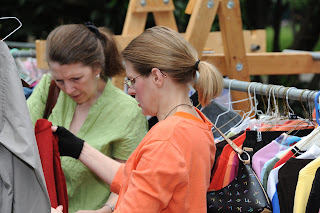 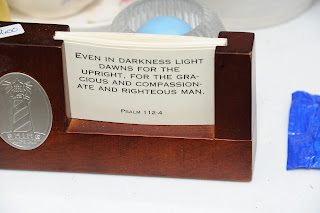 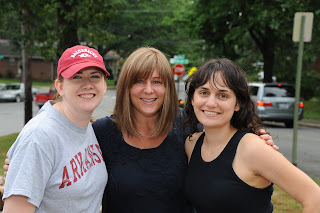 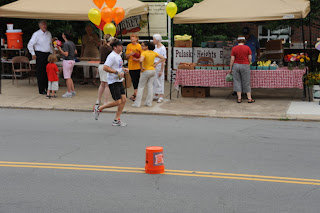 The literary world once again will doubtlessly heave a weary sigh at this news but I am out of here for awhile.  Between alumni stuff, photography stuff, Bourbon and Boots stuff, day job stuff, and work-on-the-house stuff I got way too much to do before I hit the road at the end of the week.

Talk among yourselves until I get back.
Posted by tmfw at 9:10 AM No comments: