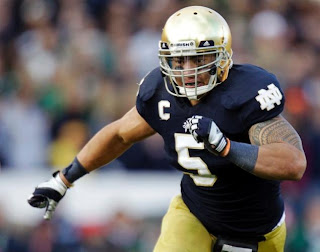 Just when you think that you have heard everything, something comes along to prove you wrong.  By now everyone has heard the story of Lennay Kekua, Notre Dame linebacker Manti Te'o's non-existent dead girlfriend.  The one who allegedly died on the same day that his grandmother did, thereby providing him with the inspiration to give his all for the Fighting Irish who finished undefeated in the regular season.  Which earned them the right to get annihilated by Alabama.

Both Manti and the brass at ND knew that he was the subject of an elaborate and exceedingly cruel hoax prior to the Alabama debacle.  Manti knew about it on December 6, prior to the Heisman Trophy presentation ceremony.  Notre Dame was informed of the hoax on December 26.  But nobody said anything about it until Deadspin.com broke the story on January 14th.  Then all hell broke loose.

There isn't an aspect of this story that is not completely baffling.  Why would somebody perpetrate such an elaborate con job that apparently was not extortionate in any respect?  How does one have a relationship with someone by phone and Internet and yet never meet them?  How could a big man on campus like Manti not have other female friends?  Maybe he does, but I haven't heard of any.  Indeed, it is remarkable how little you are hearing from anybody in South Bend about any of this.  Even creepier, we now know that the person providing the voice of Lennay was occasionally a man speaking in falsetto.

I am a tenor.  Practically an alto.  I don't think I could convincingly impersonate a woman's voice if I wanted to.  Secondly, I like to think that I could discern between 2 different speaking voices with relative ease.  He really couldn't tell them apart?

I really don't have a clue.  Out of uniform, Manti certainly comes across as extremely naive.  But my God.  I was young and naive once.  I can't imagine getting sucked into something as bizarre as this.  ESPN's Scott Van Pelt has opined that maybe the young man "just isn't good with girls" as some guys aren't that he preferred a long distance relationship.  There have been hints that maybe Manti is gay and that Lennay was a convenient "beard" while he was in the spotlight in the uber-macho world of sports.  Who knows?

Here's what I think.  I think he stuck to the story even though he knew by December 6 that Lennay was no more real than Wonder Woman because it had become bigger than him.  Perhaps he was afraid to confess that he had been played for a fool, or a rube as he was referred to by Smoking Gun, while he was still in the running for the Heisman and while his team had at least a theoretical possibility of being crowned National Champs.

What is less understandable is why Notre Dame didn't insist that he go public as soon as it was informed of the hoax.  But then again, this is Notre Dame.  Where George Gipp never asked the team to win for him, Knute Rockne didn't have a sick child and the Rudy story is mostly bullshit.  As Chicago sports columnist Rick Telander said about this whole mess," This whole thing is so nutsy that I believe it only could have happened at Notre Dame, where mythology trumps common sense on a daily basis.  Given the choice between reality and fiction, Notre Dame will always choose fiction."

And maybe that's the explanation.  At Notre Dame mythology trumps common sense.  Which is too bad.  Because young Manti Te'o could have used the intervention of someone with some common sense.

Lord knows he sure doesn't seem to have much.

I have been struck down by a raging head cold which is suppressing my muse.  Ugh.  Will return after I am released.
Posted by tmfw at 7:38 AM 1 comment:


Been awfully busy the last few days.  But did manage to get this done for the newspaper's blog.  I've never watched Oprah before.  I think I will give her a look on the 17th just to see what our hero "confesses" to.  It should be interesting in any event. 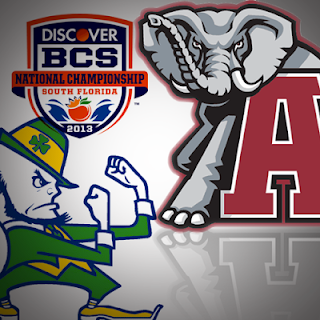 I am conflicted gentle readers.  It's hard to pick a favorite in tomorrow night's BCS Championship game between the Alabama Crimson Tide and the Fighting Irish of Notre Dame.  On the one hand, if the Tide pulls this off they will have won 3 of the last 4 National Championships.  Or something like that.  That's pretty impressive.  And they play in what we are routinely told is THE TOUGHEST CONFERENCE IN AMERICA!!!!

On the other hand, ND under coach Brian Kelly has gone from a laughing stock, at least in the eyes of people like myself, back to prominence if not to their former shake-down-the-thunder-from-the-skies glory of yore.  They were pretty much left for dead when Charlie Weis got canned.  So you have to hand it to them.  Notre Dame isn't the easiest place in the world to get kids to.  Indeed, it is my own personal theory that Northwestern started getting good when they convinced the local kids to stay home instead of going across Lake Michigan to Indiana.

"So, Jamall," I envision the pitch going, " Where would you rather spend Saturday night?  Rush Street in Chicago or in a bowling alley with a bunch of crackers in South Bend?  Choose wisely, young man."

I can't really root for Alabama.  Either the team or the State where families are rent asunder by the choice of attendance at either Auburn or Alabama.  Notre Dame has football in perspective compared to those two.  And while we may reasonably anticipate that Auburn is heading for the NCAA hoosegow over Cam Newton and other misdeeds, Alabama fans shouldn't be to smug about their plight.  If the NCAA had subpoena power the Tide's football program would be busting rocks right beside the War Damn Eagles.  Of this I have no doubt.  Besides, I can't root for Alabama, and its humorless coach Nick Saban,  because that would be like rooting for the Wehrmacht or something.

So do I welcome the prospect of Notre Dame winning a national title for the first time since they were led by Lou Holtz, the resident crazy uncle over at ESPN?  I do not.  Indeed, I have only one response to this possibility.

Alabama's alums are pretty insufferable.  But Notre Dame's are infinitely worse.  And they have metastasized throughout the country whereas the Tide's fans pretty much stick to themselves here in the South.  For which a grateful nation should give heartfelt thanks.

If the Irish win the National Championship, all we will hear about for the next year is how Notre Dame is like unto Harvard (It ain't.  It ain't even like unto Northwestern), how it has things in perspective, and how it does things the right way. Touchdown Jesus, the Fight Song, George Gipp and black kids dressed like leprechauns.

This would be worse than the Cubs winning the World Series.  Notre Dame's fans could give full reign to their narcissism from sea to shining sea.  It's just not worth it.  Trust me.

I actually don't think that ND is going to win.  Their offense has a tendency to sputter at times and they damn near lost to Pitt and would have lost to Stanford without the timely intervention of home cooking from the refs.  Alabama's one loss came to a team whose quarterback is the second coming of Doug Flutie.

But still,  I'm not rooting for Alabama.  But I am praying that a just and merciful Providence will deliver us from a Notre Dame victory tomorrow night.